Steve Bannon said Sunday everything that has come to light from Hunter Biden’s hard drive is true as he paints Joe Biden as a ‘stone cold liar’ after revelations show deep financial ties between the Biden’s and Chinese Communist Party.

‘Joe Biden has lied about this for years,’ Bannon told Sky News in an interview Sunday.

‘What Fox did, which was very interesting on that issue but also on the Chinese – they actually went to the people on the emails and contacted them. What was so stunning is that they reported last night that one, the guys on the emails said absolutely the meetings happened. This is not off of some Russia intelligence operation. That emails correct, the meanings correct and, by the way, that 10 per cent of the equity is Joe Biden’s,’ Bannon said.

The former White House strategist for President Donald Trump said Hunter’s lawyer tried to email the repair shop to get the laptop back and has since then contacted Bannon and his team to retrieve the sensitive hard drive.

‘Hunter Biden’s lawyer has come to us both with phone calls and with emails saying, ‘hey, I’ve got to get the hard drive back’,’ Bannon said.

‘This is not some Russian intelligence operation; they admit it’s their hard drive,’ he continued in proving the validity of the information found on the laptop. ‘We have the emails from the Lawyer, if we need to release them, we’ll release them.’

Republican Senator Ron Johnson of Wisconsin, chairman of the Committee on Homeland Security and Governmental Affairs, is calling on FBI Director Christopher Wray to confirm or deny details regarding the hard drive.

In a letter to Wray, which was obtained by Fox News Sunday, Johnson says that a whistleblower contacted the committee on September 24.

He said they claimed to possess a laptop that Hunter left at his business, and that he had turned it over to the FBI.

Johnson noted in his letter that his staff immediately asked the FBI to confirm certain details to better validate the claim, but the bureau said they would not comment on any of the information.

Trump weighed in on Hunter’s emails on Twitter Sunday, and gave his Democratic rival a new nickname: ‘10% Joe.’

‘Hunter Biden’s laptop is a disaster for the entire Biden family, but especially for his father, Joe. It is now a proven fact, and cannot be denied, that all of that info is the REAL DEAL,’ Trump tweeted. ‘That makes it impossible for ‘50%, or 10%’ Joe, to ever assume the office of the President!’ 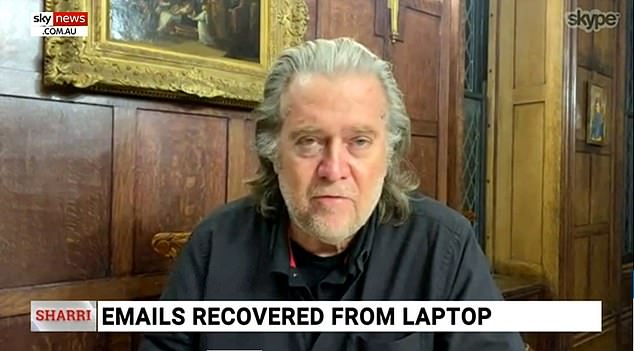 Steve Bannon said everything found on Hunter Biden’s lap top is true as he claims: ‘Absolutely the meetings happened. This is not off of some Russia intelligence operation. That emails correct, the meanings correct and, by the way, that 10 per cent of the equity is Joe Biden’s’

Trump weighed in on the ordeal, dubbing Joe Biden with a new nickname: ‘10% Joe’

‘Joe Biden is a corrupt politician, and everybody knows it,’ the president continued in another tweet. ‘Now you have the proof, perhaps like never was had before on a major politician. Laptop plus. This is the second biggest political scandal in our history!’

He also praised the media outlet, The New York Post, for first revealing the contents of the hard drive in a report last week.

‘Very proud of the @nypost, my former ‘hometown newspaper’. They have said and shown what everyone knows about Sleepy Joe Biden. He is a CORRUPT POLITICIAN!!!’ Trump, a usual critic of the press, tweeted.

Bannon continued in his interview with Sky News that ‘the stunning thing about these emails… is that Biden has basically said to the American people, ‘I knew nothing about it.’ Now we actually see they had meetings set up.’

‘That sets the predicate that Joe Biden has lied consistently over the last couple years to the American people. He lied on the debate stage with President Trump,’ he said.

Emails on the laptop revealed that Hunter planned to introduce his father – who was the then-Vice President – to an executive at the Ukrainian energy company Burisma, where Hunter served on the board of directors.

Publicly, the former vice president has said he’s never spoken to his son about his overseas business dealings.

But the emails seem to indicate otherwise. 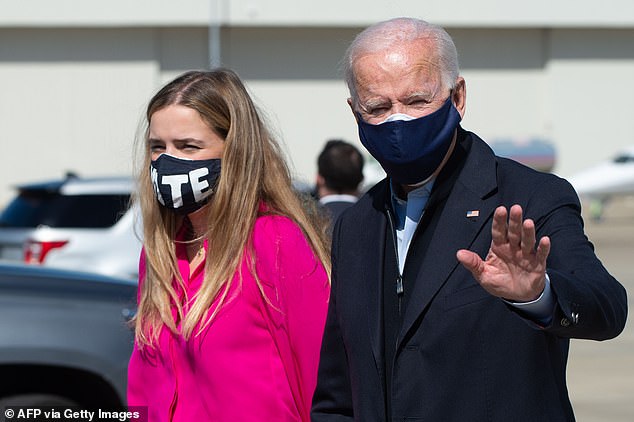 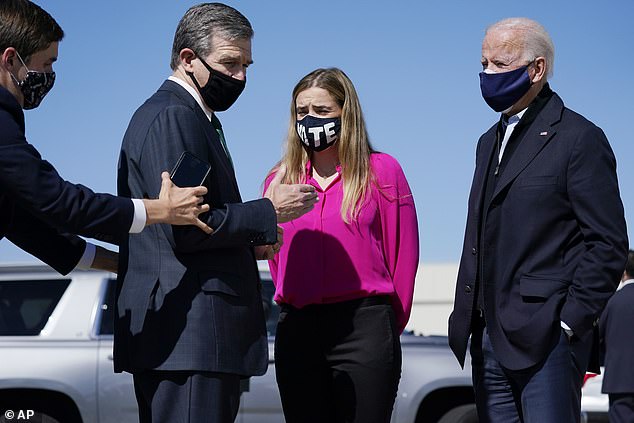 Bannon also said Sunday in an interview with The Australian that Trump will run for re-election in 2024 if he loses the presidential race to Joe Biden next month.

‘You’re not going to see the end of Donald Trump,’ Bannon said when asked what will happen if he fails to win a second White House term in November.

Bannon, who was recently arrested for federal money-laundering and fraud, added that he believes the November 3 election was ‘closer than is being reported’, and said ‘Trump will win on election day’.

‘I’ll make this prediction right now: if for any reason the election is stolen from or in some sort of way Joe Biden is declared the winner, Trump will announce he’s going to run for re-election in 2024,’ he told the outlet.

Bannon also predicted the election result will go to the Supreme Court and may even be conferred to the House of Representative in January, saying the outcome will be contentious and ‘won’t be settled anytime soon’.

The messages suggested that Hunter Biden had arranged for a top executive at a Ukrainian energy firm, of which Hunter was on the board of directors, to meet his father in person, when he was vice-president and in charge of US relations with Ukraine 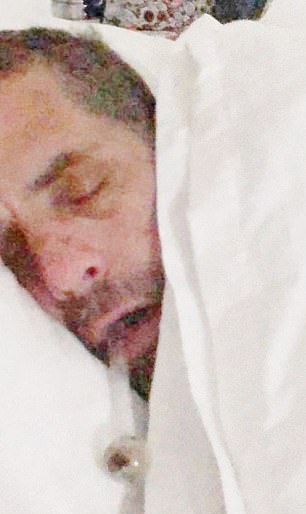 The New York Post published a photograph, said to be found on an abandoned laptop, showing Hunter with a crack pipe in his mouth, left. A serious of compromising pictures of Democratic candidate Joe Biden’s son Hunter, 50, (above) have been released just weeks ahead of the US election on November 3

Bannon’s latest comments cast a slightly more pessimistic tone to remarks made just days ago during a speech in front of the Young Republican Federation, in which he resolutely stated that not only will Trump win on November 3, but he’ll secure victory very early.

‘At 10 o’clock or 11 o’clock… on November 3, Donald J. Trump is going to walk into the Oval Office, and he may hit a tweet before he goes in there… and he’s going to sit there, having won Ohio, and being up in Pennsylvania and Florida, and he’s going to say, ‘Hey, game’s over,” Bannon, Trump’s 2016 campaign CEO, told the crowd.

‘The elites are traumatized. They do not want to go stand in line and vote. That, ladies and gentlemen, is a game-changer,’ Bannon continued. ‘It [the decisive factor] is what electorate shows up to vote on a vote that can be certified. That’s a vote that counts. And right now, what they [Trump critics] don’t want to talk about, is Donald J. Trump leads on people who are actually going to show up and vote on November 3, by 21 percent.’ 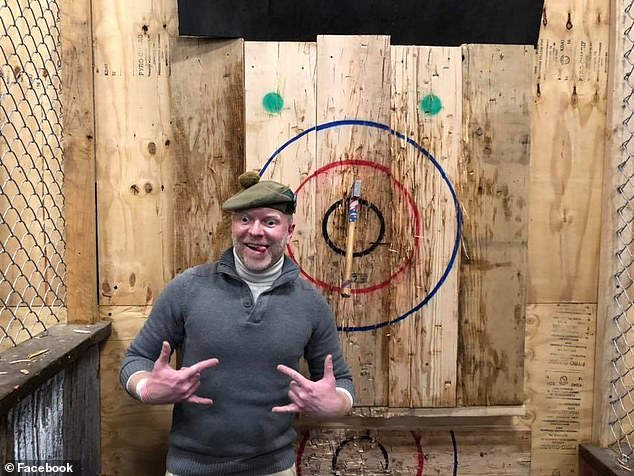 Independent Mac shop owner John Paul MacIsaac, 44, of Wilmington, Delaware, says he is person who turned over Hunter Biden’s emails to the FBI and Giuliani. Steve Bannon said Hunter Biden’s lawyer tried desperately to get the hard drive back after it was left at the lap top repair shop

Speaking to the Australian, Bannon also claimed that the lawyers acting for Joe Biden’s son Hunter have made numerous attempts to retrieve his computer hard-drive that’s now at the center of an FBI probe.

Such extensive efforts reportedly include sending legal letters to the owner of a Delaware repair shop where the Democratic presidential candidate’s son had reportedly dropped off his laptop to be serviced in 2019.

Last week, the New York Post published emails and photographs that the outlet claimed were contained on a laptop owned by Hunter Biden, which he apparently never collected from the repair store.

The hard drive was retrieved by a third-party from the shop owner in January and then sent to Giuliani. Giuliani seemingly then sat on the information for months, before releasing it to the Post just weeks before the election.

The messages suggested that Hunter Biden had arranged for a top executive at a Ukrainian energy firm, of which Hunter was on the board of directors, to meet his father in person, when he was vice-president and in charge of US policy with Ukraine.

In the emails published by the Post, Biden is shown pursuing a lucrative deal involving China’s largest private energy company, saying in one message that the proposed deal would be ‘interesting for me and my family’, before discussing remuneration packages.

Bannon, who alerted the Post to the laptop’s existence, claimed that Biden’s lawyers contacted Rudy Giuliani, Trump’s attorney, hours before the emails were published in a last-ditch effort to retrieve Hunter’s alleged hard-drive. 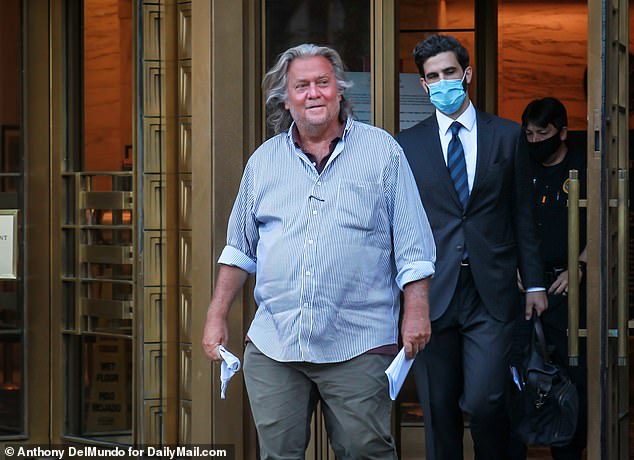 Bannon told The Australian in an interview that was released Sunday that even if the president fails to win a second White House term,’You’re not going to see the end of Donald Trump’

‘His lawyer, [George] Mesires from Chicago, one of the top lawyers in the country, emailed us. He called the repair shop, he sent us an email, he sent the repair shop an email saying Hunter dropped these off, he forgot to pick them up. That’s an email,’ Bannon told the Australian.

‘In addition, we haven’t ­released this, Hunter Biden’s lawyer has come to us both with phone calls and with emails saying I’ve got to get the hard-drive back. This is not some Russian ­intelligence operation, they’ve ­admitted it’s their hard-drive.

‘It was the night before we came out with the first story, I think, because the NY Post went to them for comment… they panicked. One lawyer started calling around and sent the emails.’

Bannon reiterated his claim that Biden’s lawyer had also sent legal notices to the owner of the repair shop seeking return of the hard-drive.

‘We’re breaking news here. He actually in a panic called… ­because Hunter when he dropped it off, there was two or three of these shops in Wilmington. They called around and he figured out it might be this guy. He called him and when the guy said I can’t ­remember, I’m going back to my shop, he sent a couple of emails in a panic saying ‘I’ve got to get my hands on this right away.”

Bannon, who said he was contacted by Giuliani in late August to help with media strategy for the emails, said he has been holding on to the legal letters and waiting to use them if the Biden camp tried to deny the laptop ­belonged to Hunter.

‘We haven’t released that yet. We’re holding that back to make sure if they walk into the trap, we’re just going to drop it on them,’ he said.

‘My training under Andrew Breitbart was put it out, let them lie and then bang, drop them on the lie, let them lie some more, drop it again. We have the emails from the lawyer, if we need to ­release them, we’ll release them.’

The FBI is reportedly conducting an investigation into whether the allegations are part of a Russian disinformation campaign against the Biden campaign, though the agency has refused to speak publicly on the matter.

FBI Director Christopher Wray has warned that Russia is trying to ‘denigrate’ Biden ahead of the election and damage his chances of unseating Trump.

Bannon was arrested and charged in August with defrauding donors to a private fund-raising effort called We Build the Wall, which was intended to bolster the president’s signature initiative along the Mexican border.

The fund-raising effort collected more than $25 million, and prosecutors say Bannon used nearly $1 million of it for personal expenses.

Bannon pleaded not guilty to the charges on August 20.

4 hours ago The Epoch Times

Anti-Macron fury continues to rage across the Muslim world

How the Disciples of an Obscure Italian Linguist Subverted America