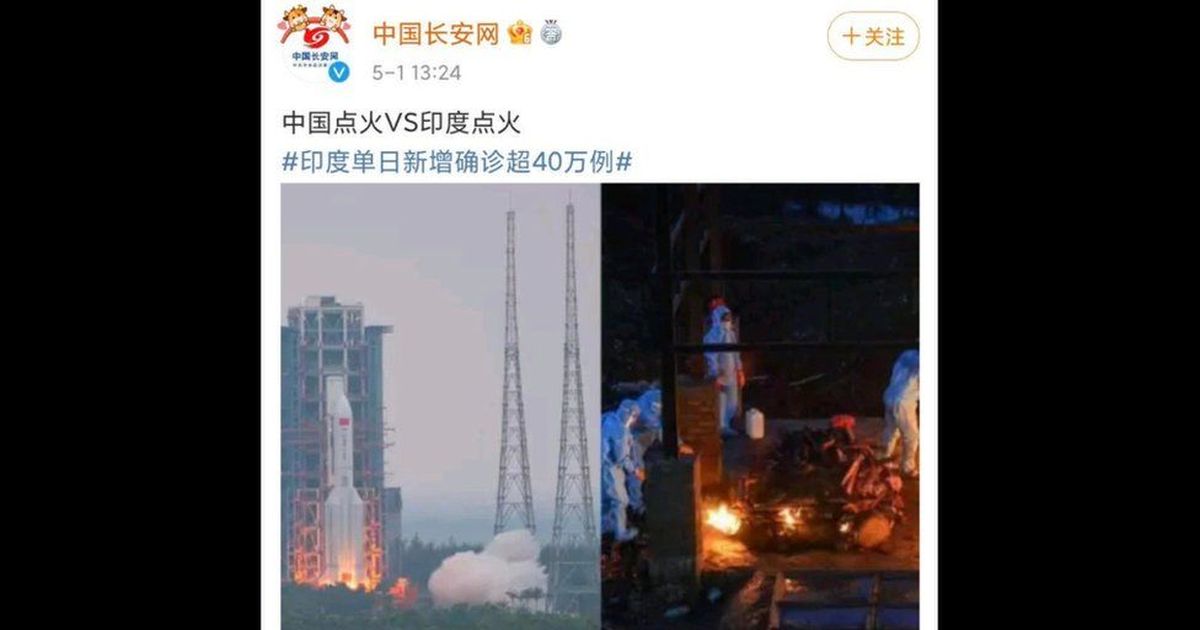 
It’s a grotesque sense of humor but it’s better than nothing.

The party’s official Weibo account (Chinese version of Twitter) featured a post containing a picture of a recent Chinese missile launch juxtaposed next to a picture of India cremating Covid victims. The caption read: “China lighting a fire versus India lighting a fire.”

Not surprisingly, the post was later deleted after an international outcry.

But what grotesque goon would think to go public with such garbage in the first place? Especially since the virus that’s already taken more than 218,000 lives in India — and overwhelmed its hospitals, morgues and crematoriums — started in China.

No damage control can take this back. China’s rulers see India as an enemy, and they’ve been testing the unofficial border: Skirmishes across the Line of Actual Control last year killed 20 Indian soldiers.

This is China rubbing the world’s nose into it and daring someone to call them out for it. India was none too pleased with the “joke” as Indian TV made clear.

The Ministry of Public Security, which has 31 million followers on Weibo, also posted a similar message on Friday comparing the image of an emergency hospital in Wuhan named Huoshenshan (which means fire god mountain), with a photo of a mass cremation ground in India. That post has also been deleted.

Chinese President XiJinping sent a message to Indian Prime Minister Narendra Modi on the same day of the Ministry of Public Security’s post and pledged to work with New Delhi to tackle the crisis. The Chinese foreign ministry has also been trying to promote its efforts to send medical supplies to India.

Two top Chinese Communist ministries mocking India for the horrific death toll from Covid — a death toll that they are at least partially responsible for — would indicate a planned propaganda effort and not some nationalist bureaucrat trying to make a point.

Or maybe it’s the young folk having a spot of fun at India’s expense? That’s what Long Xingchun, president of the Chengdu Institute of World Affairs thinks.

How about an understanding of what it means to be a human being? You might expect something like that from some Twitter troll pecking away in his mama’s basement, not the ministry representing a supposed superpower wannabe.

Stomach turning, to say the least.

25 mins ago The Federalist

30 mins ago The Gateway Pundit